AAG, which started its HMBS program just two years ago this month, is the leading HMBS issuer for the first half of 2015. After more than 5 years as industry leader, RMS ceded the number one slot by just $52 million.

HMBS Issuers in the first half of 2015 sold $4.5 billion, a 44% increase over the $3.1 billion issued in the first half of 2014. New issuance was up 52%, tail issuance was up 23%, and new issue, seasoned pools increased twelve-fold as whole loan HECM buyers capitulated to HMBS’ superior execution. The dramatic volume increase is also likely attributable to last year’s FHA PLF increase and a pre-FA origination surge this spring. 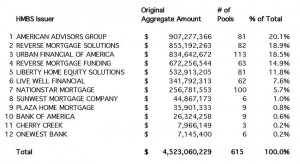 (Editor’s note: The following was published by New View Advisors, which compiled this data from publicly available Ginnie Mae data as well as private sources.)