For the nine months ended September 2015, AAG kept its #1 HMBS Issuer title, with second place RMS just $102 million behind. There was no ranking movement among issuers from June, although Silvergate Bank did issue one pool, raising the total number of HMBS issuers to 13, the historical high watermark for issuer count. AAG issued $1.347 billion of securities for a 20.0% market share, RMS issued $1.245 billion for an 18.5% market share, and Urban Financial issued $1.236 billion for an 18.3% market share. RMF and Liberty rounded out the Top-5 issuers with $974 million and $804 million respectively. The Top-5 issuers accounted for more than 83% of all issuance, down just slightly from last quarter’s 84%.

HMBS Issuers sold a total of $6.7 billion through three quarters, more than all of 2014’s $6.6 billion, though monthly HMBS volume has been declining since May of this year. The all-time record for annual HMBS issuance is 2010’s $10.7 billion. 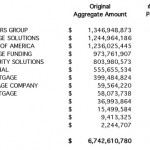 Nomura remains the #1 issuer for the first nine months, with $2.4 billion, Bank of America Merrill Lynch was second with $2.2 billion, and Credit Suisse was third with 6 issuances totaling $1.3 billion, though CS issued no new securities in the third quarter. Barclays rounded out the group with $611 million issued through three transactions for a 9% market share. Life-to-date BAML has issued 44% of all HREMICs, Barclays 14%, and Nomura 12%.

Approximately 60% of outstanding HMBS securities have now been resecuritized into HREMICs.
HREMIC collateral consists of HMBS, which are Ginnie Mae guaranteed pass-through securities. HMBS are backed by pools of participations of HECMs, which are FHA-insured reverse mortgages. This double layer of government guarantee, combined with the relatively high coupon and favorable prepayment patterns of the underlying loans, results in very favorable execution, even when compared to other Ginnie Mae “forward mortgage” securities. 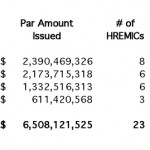 (Note: The following was published by New View Advisors, which compiled these rankings from publicly available Ginnie Mae data.)