Testifying before the House Financial Services Committee this morning, Housing Secretary Ben Carson said he would consider adopting better tools for FHA to assess and manage risk in the Home Equity Conversion Mortgage program, including the creation of a separate insurance fund just for HECMs.

“Those are things worth pursuing,” said Secretary Carson, in response to a question raised by Rep. Dennis Heck (D-WA).

Secretary Carson said he would enjoy having a conversation with Rep. Maloney on the topic. “Let’s look at the numbers and see what makes sense,” he said.

“When the reverse mortgage program was initiated, I think it was done with very good intentions, but without really looking down the pike, and people were taking out much larger amounts of their equity in the beginning than was sustainable,” responded Carson. “This was leading to a lot more problems than it was helping. It’s also resulted in a much higher default rate, and that’s been a big drain on the MMIF, so the changes that we’ve made will sort of stop the bleeding in terms of new reverse mortgages.”

Watch clips from the hearing on NRMLA’s YouTube Channel 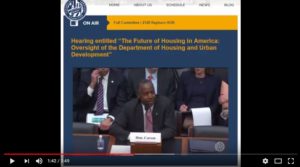