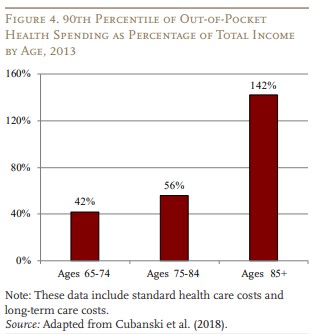 As Americans continue to live longer lives, they will by challenged by high out-of-pocket medical expenses, the possibility of making financial mistakes due to declining cognitive abilities and potential economic hardship during widowhood. That’s according to a new report from the Center for Retirement Research at Boston College, “What Financial Risks do Retirees Face in Late Life?”

Researchers emphasized that while Medicare provides universal health coverage to retirees, out-of-pocket costs can still pose a substantial burden for elderly households. The authors of the report cited one recent study that estimates the average household will incur about $100,000 in total out-of-pocket medical spending and that the top five percent of spenders will incur almost $300,000.

The Center adds that financial skills tend to deteriorate for many, with nearly one in six seniors having reported losing money in a fraudulent investment scheme. In addition, tomorrow’s retirees will have fewer children to support them, and children are a primary source of financial management assistance.