Home » Reference Section » How Secure Is Employment at Older Ages? Not Very. 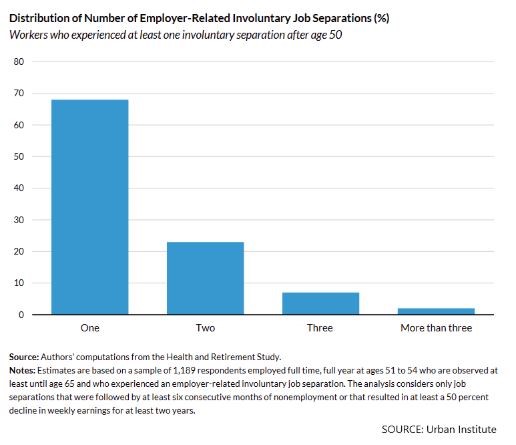 Nearly half of full-time workers ages 51 to 54 experience job loss after age 50 that substantially reduces earnings for years or leads to long-term unemployment, which then impacts future retirement security, according to a new report from the Urban Institute and ProPublica.

Titled How Secure Is Employment at Older Ages?, the researchers analyzed data from the Health and Retirement Study, sponsored by the National Institute on Aging and the Social Security Administration, that tracks older adults. Researchers focused on employer-related separations, such as layoffs and business closings, and examined instances that were “financially consequential” with either long periods of unemployment or sustained, substantial wage loss.

As researchers point out, older workers often have more difficulty finding jobs due to age discrimination. And when they do find a new job, it’s unlikely to pay as much. Only 1 in 10 of those older workers who experience an involuntary job loss ever earn as much per week after, the report found.

“The steady earnings that many people count on in their 50s and 60s to build their retirement savings and ensure some financial security in later life often vanishes, upending retirement expectations and creating economic hardship,” the researchers wrote. “This problem will likely intensify, as more people realize they must work longer to enjoy a comfortable retirement.”

The report concluded that more research was needed to understand why many employers seem reluctant to employ older workers and to devise ways to help older workers overcome these barriers.