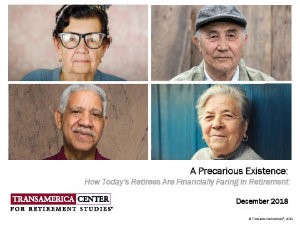 Fewer than half of retirees (46 percent) agree that they have built a large enough retirement nest egg, with only 16 percent “strongly” agreeing and 30 percent “somewhat” agreeing, according to a new online survey of 2,043 retired or semi-retired Americans conducted last July by the Transamerica Center for Retirement Studies.

Titled A Precarious Existence: How Today’s Retirees Are Financially Faring in Retirement, the survey provides detailed findings about retirees’ lives in retirement, financial situation, living arrangements and plans for long-term care. Retirees are still relatively young at age 71 (median), healthy, and have a positive outlook on life. They are spending more time with family and friends (61 percent), pursuing hobbies (44 percent), traveling (39 percent), and engaging in a variety of other activities.

Retirees are getting by financially for the time-being. However, the survey finds indicators of their vulnerability:

Among the 28 percent of retirees who have mortgage debt (including any equity loans or lines of credit), the estimated median is $52,000.