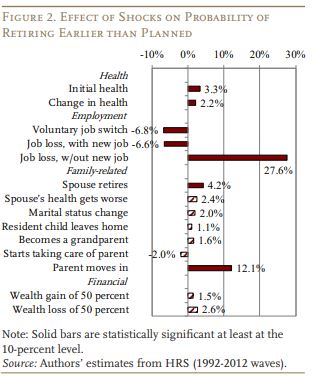 Researchers at the Center for Retirement Research at Boston College believe health issues play the largest role in causing early retirements, both because people in bad initial health overestimate how long they can work and because health often worsens before the age at which they planned to retire.

According to a new Issue in Brief, the causes or “shocks” driving earlier-than-hoped retirements can be lumped into four categories: health, employment, familial and financial.

The authors conclude that more research in this area is needed since the factors considered in the brief explain only about a quarter of early retirements.