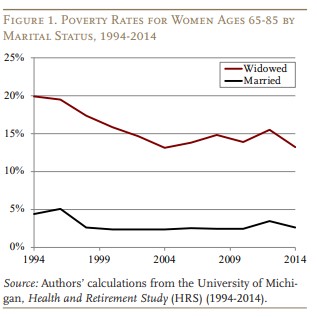 Historically, widows have experienced higher poverty rates compared to married women, but that gap shrank from 1994 to 2014. According to a new Issue Brief published by the Center for Retirement Research at Boston College, the poverty rate for widows declined from 19.9 percent of women aged 65 to 86 in 1994 to 13.2 percent in 2014.

Potential reasons include rising levels of education and work experience for women generally and a higher marriage rate among women with more education.

Going forward, researchers said the poverty rate should continue to fall not only because of education and work patterns but also because of marriage selection. Despite the progress, however, the Center for Retirement Research warns that widows will remain at greater risk of poverty than married women.