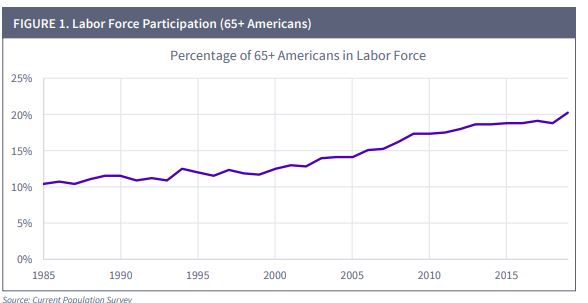 For the first time in 57 years, the participation rate in the labor force of retirement-age workers has cracked the 20 percent mark, according to a new report from money manager United Income that was reported on by Bloomberg reporter Suzanne Woolley.

The Bureau of Labor Statistics (BLS) expects this upward trend to continue in the near term, estimating that 13 million Americans aged 65+ will be in the labor force by 2024.

Improved health has been a key driver of this increase in labor force participation, said United Income, which analyzed data from the Census Bureau, BLS and Centers for Disease Control (CDC). More than three out of four Americans aged 65+ report being in good, very good or excellent health, and this proportion has grown steadily over the past 35 years. This improved health means that retirement-age Americans experience fewer limitations in what they can do: 67 percent experience no limitations in any sort of activity—up from 60 percent in 1997.