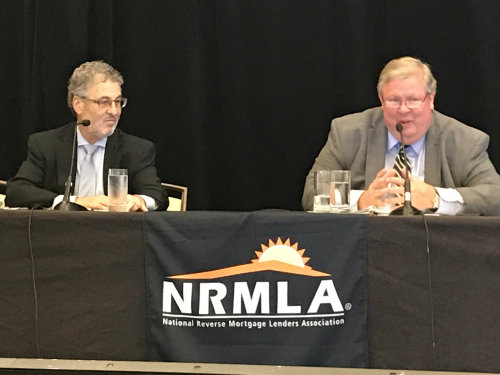 In his keynote address at this week’s Eastern Regional Meeting in New York, Deputy HUD Secretary/Federal Housing Administration Commissioner Brian Montgomery reaffirmed his commitment to making the Home Equity Conversion Mortgage a viable option for consumers who wish to age in place and for businesses that want to originate and service loans. He further noted that collateral risk assessment, combined with previously enacted program changes in 2017, are having a positive financial impact on the Mutual Mortgage Insurance fund.

“The principal limit factor and mortgage insurance premium changes in 2017, combined with second appraisal, allow us to better manage program risk with revenue,” said Montgomery. “These changes will help assure the viability of the HECM program going forward. Most recent financial estimates are encouraging, showing that the effect on the MMI fund is improving.”

Montgomery commented on a recent meeting with NRMLA’s leadership to discuss additional program enhancements, including a new HMBS securitization option and expanding FHA’s Cash for Keys program to include the entire HECM portfolio. Although he wouldn’t say whether either option would be adopted, Deputy Secretary Montgomery said he looks forward to future discussions with the industry on new and better approaches to improving the efficiency of the HECM program.

Ginnie Mae SVP Discusses Refinances and LIBOR Replacement
While Ginnie Mae remains deeply concerned about prepayment speeds in its Ginnie Mae II Multi-Issuer (GII MIP) program, Senior Vice President Michael Drayne told NRMLA East attendees that serial refinances are less of a problem with HECM Mortgage-Backed Securities. “That was something we were mindful of when changes to HECM margins went into effect. We are going to continue to monitor HECM refinances, but I will just say that right at this moment we’re not seeing anything that makes us think ‘oh my god, we’ve got problems on the reverse mortgage side that are equivalent to the problems we know we have on the forward side.’”

Drayne also touched on the growing speculation about what will replace the LIBOR index. He discussed a recent case involving a forward mortgage Ginnie Mae issuer that proposed using the Secured Overnight Financing Rate (SOFR) in one of its multi-class securities. Ginnie Mae officials studied the proposal and allowed the transaction to proceed. “We decided that the proposal made to us was workable and we supported it. There’s now a SOFR-indexed Ginnie Mae REMIC that’s out in the marketplace. This doesn’t imply that we made any decision, nor is it our place to, what the ultimate index should be for any government lending program that uses LIBOR today.

“We simply signed onto something that made sense,” said Drayne. “I am sure there will be proposals involving reverse mortgages that will soon be brought to us and if they meet our standards they will be added into the market as well. I just want to be clear that it doesn’t mean there’s any change that’s been officially made within the government lending arena having to do with the index that replaces LIBOR on the mortgage note or Ginnie Mae MBS.”