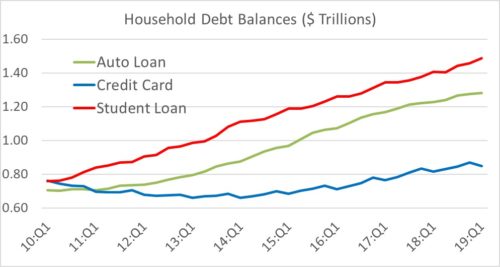 Household debt has increased by more than 22 percent since 2013 and reached a record $13.67 trillion in the first quarter of 2019. Despite this, household debt service payments (relative to disposable income) remain below 10 percent, and loan balances 90-days or more delinquent continue to hover around three percent. It would thus appear that aggregate current debt levels do not pose an excessive risk.

While home secured debt is enjoying relatively low delinquency rates we cannot ignore the disconcerting trends for other components:

Moreover, 90-day or greater delinquencies for auto loans have slowly trended upward since 2012 (to 4.7 percent), and the 90+ level for student loans remains high at 10.9 percent.

I am concerned that these disconcerting numbers will spillover to housing markets. Already, many economists are pointing to student debt as one of the factors delaying millennial household formation. It is thus important for us to follow them closely.