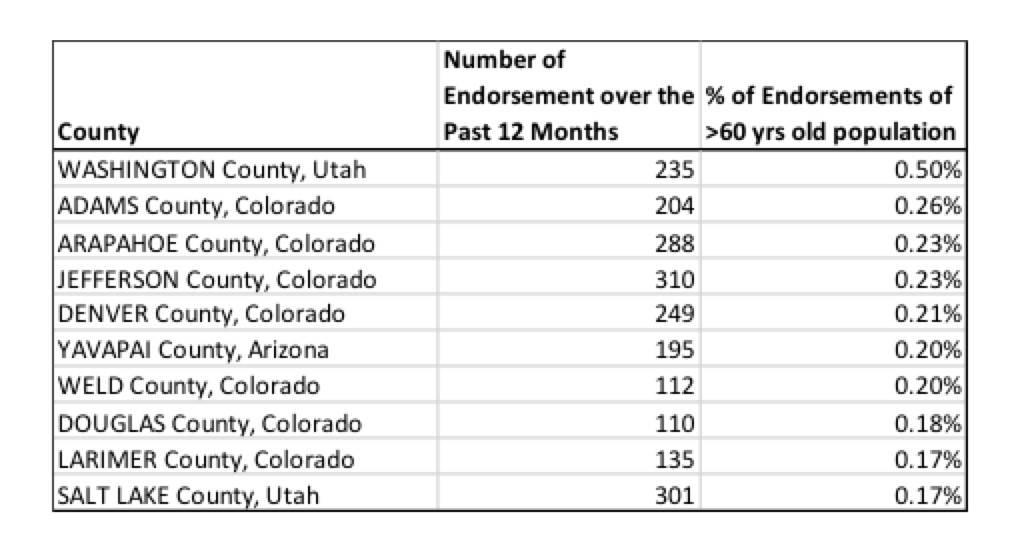 HUD recently released its June 2019 HECM Endorsement Summary Reports, our summary of which can be found here: NV Endorsement Report 2019_06. The report shows a total of 2,544 endorsements, 6% lower than May’s 2,697 units, and as we reported last month, still 20% lower year-over-year.
There were no material variations in regional origination from May. The Santa Ana Center continues to account for approximately 40% of total volume, and Los Angeles was Santa Ana’s most active field office in June with 175 endorsements.

Fairway Independent Mortgage remains the most active wholesale originator that sells its loans to other sponsors. This month Fairway is the originator of 70 such loans endorsed by HUD. Liberty Home Equity Solution sponsored the most loans originated by another lender for the second straight month, with 236 endorsements. Assuming this trajectory continues, Liberty will eclipse Reverse Mortgage Funding next month for sole position of second place, behind only Finance of America Reverse. June is the first month Liberty sponsored more loans than FAR.

This month we take a closer look at county-level market penetration. For the analysis we looked at the number of endorsements from the last 12 months as a percentage of the older-than-60 population. Despite many California counties having the most HECM endorsements by unit count, none ranked in the top ten in terms of market penetration. Of the counties where at least 100 HECM loans were endorsed in the past year, seven counties from Colorado made the top ten list, and Washington County Utah ranked highest at 0.5%

(Editor’s note: The following article was republished with permission from New View Advisors.)