Home » Reference Section » Survey: 31 Percent of Workers Do Not Have Access to Workplace Retirement Savings Plans 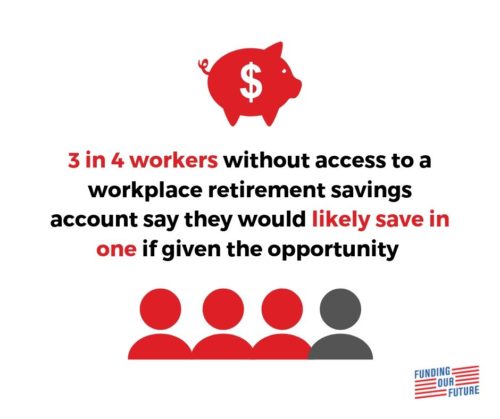 Having enough money saved for retirement is one of the biggest financial challenges Americans face. With the central role that 401(k)-type plans have come to play, those who lack the opportunity to save in a workplace retirement account are at a severe disadvantage. In a survey with Morning Consult, the Funding Our Future campaign – of which NRMLA is a sponsor – found that 31 percent of employed Americans do not have access to retirement savings accounts through their workplace.

Of those without access, 75 percent said they would be likely to set aside money in such a plan if they were given the option. This means an additional 33.8 million Americans could be saving through a workplace retirement savings plan if they were given the option – a major opportunity to improve retirement readiness across the country. Notably, the likelihood to save does differ by gender, with 82 percent of women saying they were somewhat or very likely to save if given access, compared to 69 percent for men.

Prudential’s Phil Waldeck highlighted these findings on Yahoo Finance this week. You can watch the segment here: https://twitter.com/YahooFinance/status/1149014212108279809.