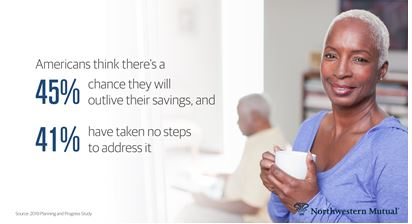 According to the 2019 Planning & Progress Study released by Northwestern Mutual, more than a fifth (22 percent) of Americans have less than $5,000 saved for retirement, and nearly half of working adults (46 percent) expect to work past the traditional retirement age of 65.

Among those who say they expect to work past age 65 out of necessity, the top three reasons why include:

For those expecting to work past 65 by choice, the top three reasons why include:

“We’re seeing a combination of factors in these numbers,” says Emily Holbrook, senior director of planning at Northwestern Mutual. “Given what we know about savings levels, the number of people who can afford to retire at 65 is low. At the same time, people across the country are changing what the face of retirement looks like and getting satisfaction well beyond their bank accounts by continuing to work. The combination of those factors – affordability and lifestyle – form the bedrock of a good financial plan.”