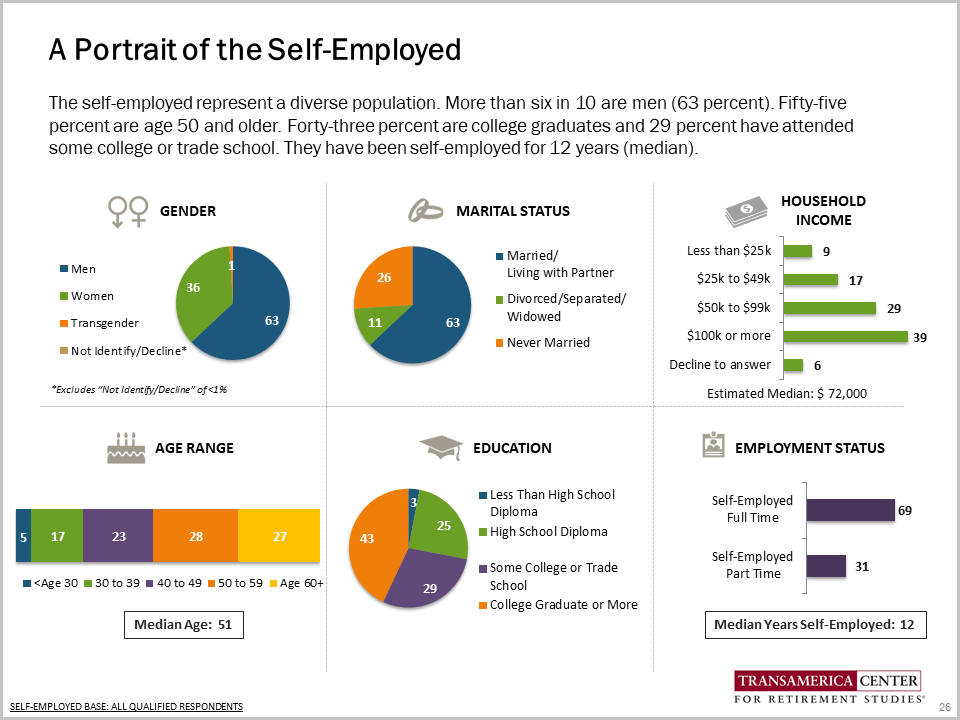 A new study from the Transamerica Center for Retirement Studies® (TCRS) – titled Self-Employed: Defying and Redefining Retirement – found that only 26 percent of self-employed workers are “very much” looking forward to retirement and that many intend to work beyond traditional retirement age, while others have no intentions of ever retiring.

“The self-employed are enjoying life. Given the autonomy and flexibility in their work situations, the concept of retirement is less relevant to them and not necessarily something they aspire to,” said Catherine Collinson, CEO and president of Transamerica Institute® and TCRS.

Among the self-employed who expect to retire after age 65 and/or continue working in retirement, their reasons for doing so are more often healthy-aging related (83 percent) than financial (73 percent). The most often cited reasons are to be active (59 percent), keep their brain alert (56 percent), enjoy what they do (54 percent) and want the income (54 percent).

The majority of the self-employed (74 percent) envision either continued work or a gradual transition into retirement, including 28 percent envisioning working for as long as possible and 46 percent thinking they will reduce their work hours or work in a different capacity that is less demanding and/or brings greater personal satisfaction. Only 11 percent of the self-employed plan to immediately stop working when they retire.

Despite the advantages of being self-employed, total household retirement savings among them is $71,000 (estimated median). The research finds that relatively few are saving in tax-advantaged retirement accounts, which suggests they may be missing out on an opportunity. Only 31 percent are saving in a Traditional or Roth IRA.