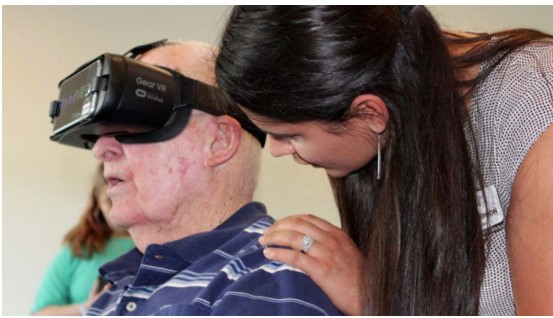 “Viarama is adding joy to the lives of senior citizens who are receiving end-of-life care,” wrote Rogers. “Using HTC Vive headsets and Google Earth VR, those in nursing homes or hospices are taken on journeys they never thought possible. The company is enabling the elderly to travel back to where they got married, or where they did their national service.”

MyndVR’s technology helps seniors cope with cognitive ailments, such as Alzheimer’s and dementia, and creates meaningful experiences without leaving the comfort and safety of a living center, and importantly, provide a bit of fun. “MyndVR uses 360-degree cameras to capture experiences,” added Rogers. “For example, they’ve filmed a live band playing Frank Sinatra with the musicians and a crowd of actors dressed in 1950s clothing. The user experiences the music as if they were sitting in the front row and feels transported to another time.”