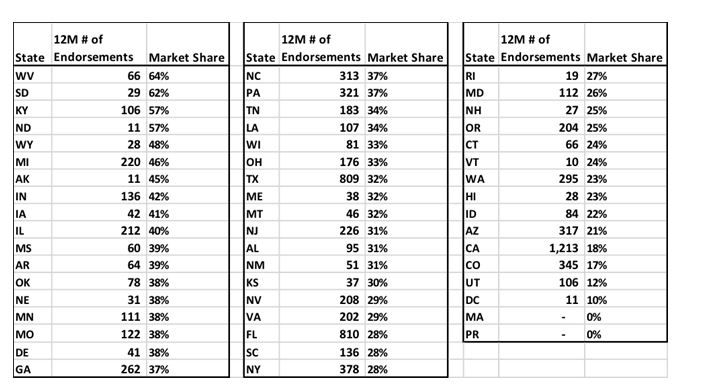 It is well known that American Advisors Group has a commanding lead in HECM endorsements. Over the past 12 months AAG’s overall monthly market share of endorsements has ranged between 23% and 32%. With loan level endorsement data we can dig deeper into the company’s geographic distribution. The following table shows that with the exception of five states and Puerto Rico, AAG has a 20% or greater market share in every state. For comparison, One Reverse Mortgage and Finance of America Reverse, who hold second and third place based on last-12-month endorsement volume, each have an approximate 8% market share nationwide. Interestingly, AAG has a slightly smaller lead in California where there’s the largest number of HECM endorsements, with an 18% market share. AAG’s dominance in the South and Midwest is substantial, with 64%, 62%, 57% and 57% respectively in West Virginia, South Dakota, Kentucky and North Dakota.