AAG kept its frontrunner HMBS issuer position throughout 2019, ending the year with $1.97 billion of issuance and 24% market share. It’s worth noting AAG’s issuance totals are all new originations and tails, with no highly seasoned pools issued. Longbridge finished in second place with $1.72 billion of issuance and 21% share, including more seasoned HMBS issuance in Q4. RMF stayed in third with $1.50 billion issued and 18% market share, which includes issuance assumed from the Live Well Financial bankruptcy. FAR was fourth with $1.21 billion issued and 14.7% market share, and PHH Mortgage Corp placed fifth with $962 million and 11.7% market share. These five issuers accounted for 89.2% of all issuance, inching closer to the Top-5 concentration high of 91% at year-end 2018. There was no change in rankings order from Q3, and all 14 HMBS issuers were active during the quarter. 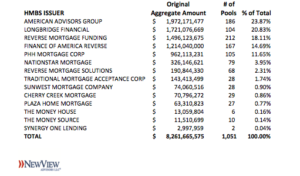 HMBS December 2019: Stocking Half Full in 2018? Then Hang Two Stockings This Year

Reverse mortgage lenders weathered a long period of reduced new origination volume, primarily due to the new lower PLFs for Home Equity Conversion Mortgages (“HECMs”) in effect since the beginning of FY2018. Yet, with this month’s issuance, the HMBS market totaled about $8.3 billion for calendar year 2019. HMBS issuance totaled $9.6 billion in 2018 and $10.5 billion in 2017. However, securitization of private reverse mortgages was much higher than previous years. As a result, we estimate that the total issuance of reverse mortgage securities backed by new collateral was about the same as 2018.

What happens to LIBOR? The industry relies heavily on the 12-month LIBOR index for its adjustable rate HECMs. LIBOR is scheduled to go away in 2021, and the plan to replace this index is not clear.

What happens to HECM? HUD has already hinted at further change. Despite significant improvements in HECM performance over the last several years, restrictions on HECM to HECM refinancing and county level MCA limits are on the table. Are lower Principal Limit Factors also looming?

(Editor’s note: The following was published with permission from New View Advisors, which compiled this data from publicly available Ginnie Mae data as well as private sources.)