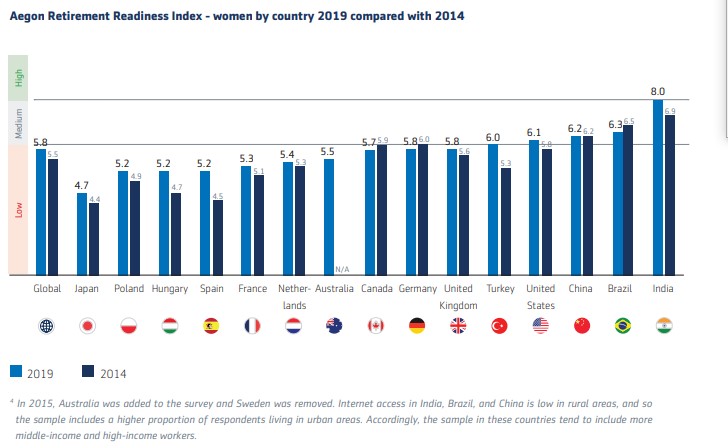 Although retirement preparedness levels among working women around the world improved marginally over the past five years, a new survey from the Transamerica Center on Retirement Studies (TCRS) found that only 26 percent of females are extremely or very confident they will be able to retire with a comfortable lifestyle.

The report, titled The New Social Contract: Achieving Retirement Equality For Women, is based on an annual survey of 15 countries spanning Europe, the Americas, Asia and Australia conducted by TCRS, Aegon Center for Longevity and Retirement and Instituto de Longevidade Mongeral Aegon.

“While this slight increase in retirement readiness in general is encouraging, much more can and should be done from a societal perspective,” says TCRS President and CEO Catherine Collinson. “Women also have an opportunity to take individual action and improve their prospects.”

The report outlines a holistic approach to retirement planning based on five fundamentals that include saving early and saving habitually, developing a written retirement strategy, creating a backup plan for unforeseen events, adopting a healthy lifestyle and embracing lifelong learning.