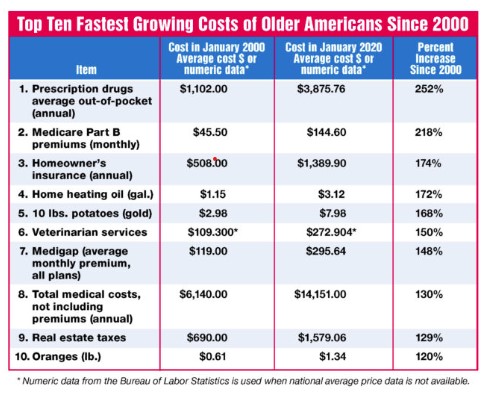 An analysis of Social Security “cost of living adjustments” (COLAs) compared to the actual costs of goods and services purchased by older Americans found that Social Security benefits have lost 30 percent of their buying power since 2000. That’s according to a study released earlier this month by The Senior Citizens League (TSCL).

“To put it in perspective,” says study author Mary Johnson, “for every $100 worth of groceries a retiree could afford in 2000, they can only buy $70 worth today.”

Between January 2000 and January 2020, Social Security COLAs increased Social Security benefits by 53 percent, but the costs of goods and services purchased by typical retirees rose almost twice as much — 99.3 percent. Medicare premiums and out-of-pocket costs, housing and homeowner’s insurance were among the most rapidly-rising costs over the past year.

In 2019, beneficiaries received a modest three percent COLA, but only 1.6 percent in 2020. To help protect the buying power of benefits, TSCL has advocated for basing future COLAs on the Consumer Price Index for the Elderly (CPI-E) or guaranteeing a COLA no lower than 3 percent.