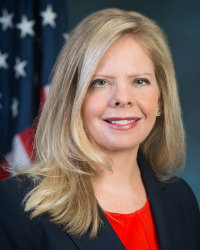 By a vote of 57-40, the Senate this week confirmed Dana Wade as Deputy Assistant Secretary for Housing/Federal Housing Administration Commissioner.

Wade succeeded acting FHA Commissioner Len Wolfson, who took over when former Commissioner Brian Montgomery was confirmed as deputy secretary of the Department of Housing and Urban Development.

“We are very excited to have Dana in this role as FHA Commissioner and look forward to continuing our long-term partnership with HUD,” says Elly Johnson, President of All Reverse Pro, Hiram, GA, and co-chair of NRMLA’s HUD Issues Committee. “Congratulations Dana and best wishes for your continued success.”

Wade was previously the Acting FHA Commissioner from July 2017 to June 2018 before she moved to the Office of Management and Budget and was replaced by Montgomery.