2020Q4 saw $3.04 billion of HMBS issued, slightly off third quarter’s $3.16 billion but up significantly from second quarter’s $2.35 billion and first quarter’s $2.09 billion. With HMBS capital markets recovered from the Coronavirus pandemic, HECM origination volume up, and a last-minute surge of LIBOR-based HMBS issuance before conversion to CMT, 2020 HMBS volume crossed $10.6 billion, second only to 2010’s $10.8 billion. While the industry got a 12th hour, 2-month reprieve, time will soon tell how Ginnie Mae’s decision to end LIBOR as an index for new HMBS pools backed by first participations will affect volume. 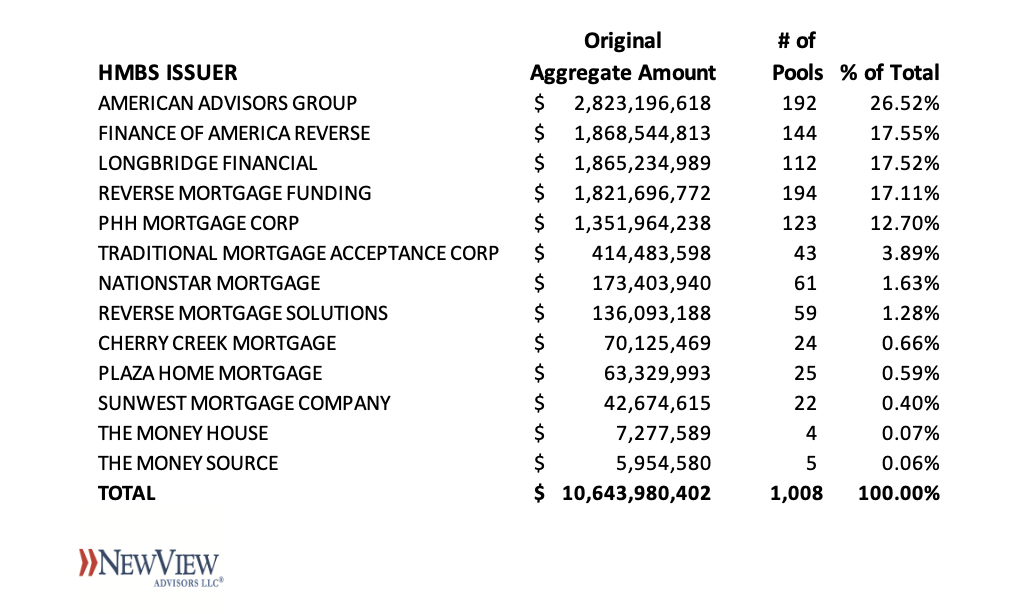 HMBS issuance totaled $1.2 billion in December 2020, as issuers continued their mad rush to originate and securitize LIBOR-indexed HECM loans before the demise of that index. It turns out December 2020 will not be the last month in which Ginnie Mae allows pooling of new HMBS pools backed by first participations of LIBOR-based HECMs either; the deadline was extended through February. 97 pools were issued in December, of which 79 were LIBOR pools.

A near-record $10.6 billion in HMBS was issued in 2020, easily beating last year’s total of $8.3 billion, 2018’s $9.6 billion, even eclipsing the $10.5 billion in 2017. 2010 remains the all time HMBS volume year with $10.8 billion issued, when Principal Limits were high, full draw fixed rate was all the rage, and no borrower financial assessment safeguards had been established.

The transition away from LIBOR remains uncertain. Yes, Ginnie Mae will stop securitizing new issue LIBOR based HECMs in March, but what about existing tail issuance? The Constant Maturity Treasury “CMT” index will return as the index for adjustable rate HECM loans, at least until a transition to another index, likely the Secured Overnight Financing Rate “SOFR,” occurs. However, no new first-participation CMT pools have been issued for many years. How will the capital markets respond? Will HUD transition away from LIBOR directly to SOFR, and if so when?

HECM was a bright spot for the industry in 2020. Origination volume soared, borrowers realized increased proceeds from historically low interest rates, the MMI Fund improved dramatically, and HUD, lenders, and NRMLA brought about meaningful borrower protections in the face of the Coronavirus pandemic.
Private production fell off in 2020, due mostly to lower interest rates for HECMs. Why couldn’t private product match the interest rate drops HECM enjoyed? Now, private product must also compete with an even higher Maximum Claim Amount of $822,375, in effect starting January 1. Will private loan volume ever match HECM?

(Editor’s note: The following articles were republished with permission from New View Advisors, which compiled this data from publicly available Ginnie Mae data as well as private sources.)