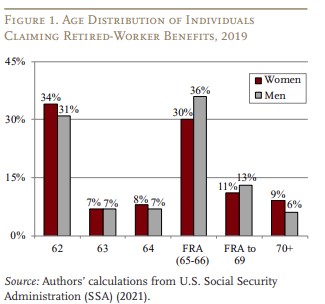 New data from the Center for Retirement Research at Boston College shows a decline over the past two decades in the percentage of 62-year-olds claiming Social Security benefits as soon as they became eligible.

This is a positive trend since claiming later leads to a higher monthly benefit check and generally improves retirement income security. The persistent downward trend was interrupted only slightly by the Great Recession, when the percentage of 62-years-olds claiming immediately rose about four percentage points, according to CRR researchers.

“Our reading of the early evidence is that COVID and the ensuing recession have not pushed large numbers into early retirement – perhaps because those most affected cannot afford to stop working,” says the Issue Brief. “Regardless of the ultimate impact, COVID is not likely to permanently reverse the trend towards later claiming.” Read the full report.