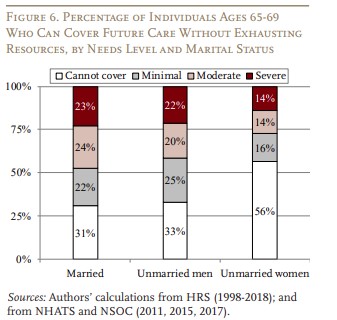 In the second of a three-part series, a new Issue Brief published by the Center for Retirement Research at Boston College concluded that about one-third of retirees do not have the resources to afford even minimal long-term services and supports (LTSS) and only about one-fifth could cover severe needs.

A growing concern is whether retirees will be able to meet future needs for long-term care without exhausting their resources. The first brief concluded that about 20 percent of retirees will escape the need for LTSS and 80 percent will need at least a year of part-time support – with around a quarter requiring full-time support for several years.

The latest analysis considers informal care from family members as well as paid care that can be bought using income and financial assets and categorizes older adults by their ability to afford minimal, moderate and severe care needs.

“The results show that about a quarter of retirees can cover severe care needs for at least five years using income, financial assets, and informal caregivers. At the other extreme, about one-quarter of individuals cannot afford even minimal care needs. The remaining 47 percent of individuals lie somewhere in between,” says the Issue Brief.

Not surprisingly, those who are married, better educated, and white have more resources for long-term care. Read the full brief.