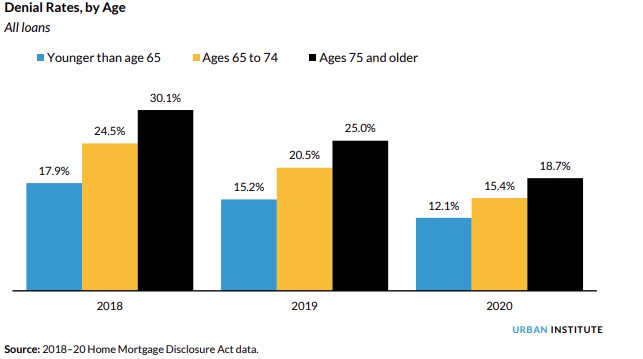 A new report from the Urban Institute finds that older homeowners are carrying substantially more debt than they have over the past 20 years that has resulted in higher denial rates for traditional home equity lines of credit and cash-out refinances, and reinforced the importance of alternative home equity extraction options, such as reverse mortgages.

Because reverse mortgages have lower denial rates, they could become a more attractive option for retirees, especially as interest rates start to rise, according to the report, “Denial Rates and Household Finances of Older Americans,” which was funded by Finance of America Reverse LLC.

“In the long run, older homeowners, with limited incomes and substantial home equity would benefit from having better access to financial products such as reverse mortgages, whose underwriting is less dependent on applicant incomes and debt and more dependent on the value of assets, homeowner equity and net worth,” says the report.

The increase in debt load is particularly acute for homeowners ages 75 and older and spans nearly all debt types, with primary mortgages being the main driver in absolute dollar terms.

The extent of the problem, says the Urban Institute, has been somewhat masked in recent years by ultra-low interest rates, which have temporarily pushed applicant debt-to-income (DTI) ratios and denial rates lower for cash-out refinances, the dominant equity extraction vehicle in the past three years. “But once interest rates rise, so will DTI ratios and denial rates. This dynamic will not serve older homeowners well,” says the Urban Institute.  Read the full report.