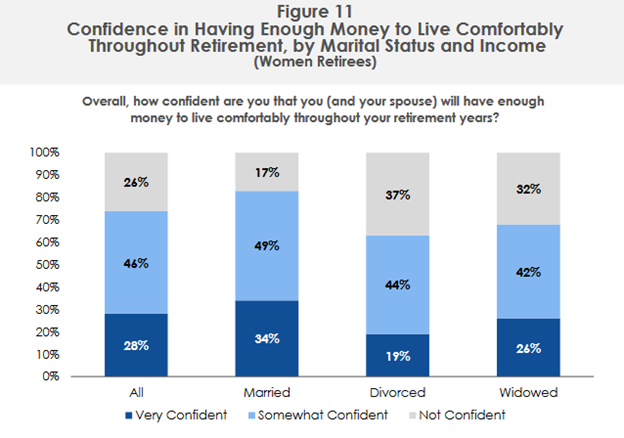 The 32nd Annual Retirement Confidence Survey (RCS) published by the Employee Benefit Research Institute (EBRI) found that 32% of retired widows and 37% of divorced women retirees are less confident of having enough money to live a comfortable retirement compared to their married counterparts and are more likely to have lower incomes and assets.

The EBRI conducts the RCS to measure attitudes toward, preparations for, and understanding of the various issues surrounding retirement by American workers and retirees.

Despite the escalating inflation being in its infancy when RCS was fielded, over half of divorced and single, never-married women workers are not confident that they will have enough money to keep up with the cost of living/inflation. This lack of confidence is much lower for married women workers, among whom only 29% express not being confident in keeping up with inflation.

The EBRI recommended that employers develop targeted messages, methods, or materials to better reach unmarried women to increase the chances of them having a financially successful retirement. Read the full report.